In April 2014, one of our neighbors here in Florence sold his house and moved to another city in northern Italy, near Venice. He took his dog with him and promised to come back as soon as possible for one of his cats — a female “inside but mostly outside” cat, named la Bionda (or, “the Blonde one”), that had lived with him and his family for her entire life.

I remember la Bionda as a young cat, passing through the neighbors’ gardens, including mine. She would often come over to say hello and be petted. She was usually accompanied by her sister, a less friendly but pretty grey tabby with long limbs and big, beautiful green eyes. Sadly, the sister disappeared early on…who knows what happened to her…I even remember looking around for her back then (incidentally, that’s one BIG reason my cats stay indoors…too many dangers out there, even in the best of neighborhoods…).

Anyway, fast forward to 2014, when la Bionda must have been about ten years old. After our neighbor packed his bags and left, my next-door neighbor and I took turns feeding la Bionda, but I took over 100% when we realized that it would be too dangerous for the kitty because of my neighbor’s non-cat-friendly dogs (another good reason to have indoor cats, don’t you think?).

I became quite taken with her, such a friendly, sweet kitty. Every time I’d go out on the terrace, she’d come running toward me, with her tail straight up in the air, and she’d push against my legs, purring madly. Irresistible. 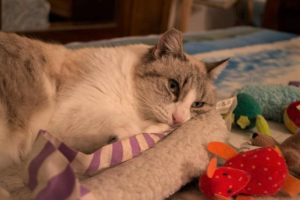 At the time, I had no reason to believe that my former neighbor wouldn’t return to retrieve his kitty. After all, she’d been with his family cat forever. He couldn’t possibly abandon her, right?

But the summer months went by, and there was no sign of him, no phone calls…nothing. She’d clearly been abandoned. You can imagine the comments we, his neighbors, made about this situation…what a rascal, he should be reported to the authorities, blablabla. In the end, though, as we will soon see, he did us a favor.

The weather began changing. Cooler days and nights…winter was approaching. Stefano and I made up our minds. We already had other four cats, but we couldn’t bear the thought of leaving this lovely kitty out in the cold.

And so, with our entire neighborhood’s approval (we’re all quite close, which is really nice), Stefano and I decided to adopt the little lady. Funny thing: our neighbors bet that she wouldn’t adapt to (only) indoor life, whereas we bet that she would. I’m happy to say that they lost the bet. I would also like to note that if, in the end, she’d been too unhappy about being an inside cat, we were prepared to let her live outside. We do not keep any prisoners in our home!

Anyway, we said we’d give it at least a couple of weeks.

And so, one day, we brought her inside. We had to give her another name that began with a P, to follow our “P” tradition. We have actually changed her name a few times during the years, finally settling on Pavarotta because she is quite vocal…She doesn’t meow, but chirps and sings…so funny.

Until she went to the vet, though, we kept her separate from our other cats, as a precaution, even though she looked extremely healthy. So I slept with her in the guest room.That first night, I barely got a wink of sleep — Pavarotta kept kneading me from head to toe, climbing all over me, and purring and chirping loudly in my ears…

The happiest kitty in the world. And I was happy that SHE was happy.

The following day we took her to the vet. She was in good health, generally speaking. She just had some minor issues such as ear mites, which are very common in outside cats and also very contagious to other cats. She also had a rather bad case of gingivitis, which the vet told me would probably have killed her if we hadn’t brought her in. Gingivitis is so painful that outdoor cats, stray cats, of course, simply stop eating. And you know what that means…Luckily, Pavarotta’s case had a happy ending. We treated the minor issues, which took about a week, as I recall, and then introduced her to the other cats.  I’ll write a post about introducing new cats to resident cats, even though there are a million blogs and websites that provide heaps of information. My information concerns only my cats, of course…We’ve tried a bunch of strategies…some work, some don’t. But that’s for a future post.

Back to Pavarotta’s story. We soon discovered that she was a miniature Houdini. After we got home from the vet, Stefano took her up to the guestroom, let her out of the cat carrier, and left the room, shutting the door, of course. About 5 minutes later I went upstairs to check on her. The window was open, but the screen was pulled down. Everything looked normal, except…Pavarotta was nowhere to be seen. I looked for her everywhere, under every piece of furniture, but no, she was gone. How???

Stefano and I finally discovered that she had somehow managed, using her claws like a knife, to cut through the mosquito netting in a corner of one of the screens, making an L-shaped hole just wide enough for her to get through. Then she had jumped onto the magnolia tree in our front yard, and, from there, reached the street. The L-shaped hole had snapped back into place, so you couldn’t tell there was a hole until you touched it. What a clever kitty!

But I didn’t have time to admire her handiwork, or claw-work. I panicked. I called my neighbors, and we all went around looking for her. But she was gone…I didn’t know if she’d come back again. Very upsetting.

The following morning, though, there she was. Sitting on our back terrace and waiting for me to go out and feed her. I laughed, relieved, picked her up and brought her inside. She hasn’t been outside since. Actually, she hasn’t even tried!

I admit, it wasn’t easy in the beginning. For several days she’d go to the terrace door about once or twice a day and cry to be let out. I would distract her with a good scratching and a cuddle. Evidently, that worked. Now, whenever I open the terrace door, she looks the other way. She knows it’s a tough life out there, and she has become very attached to us. She knows, I hope!, that we will never abandon her…