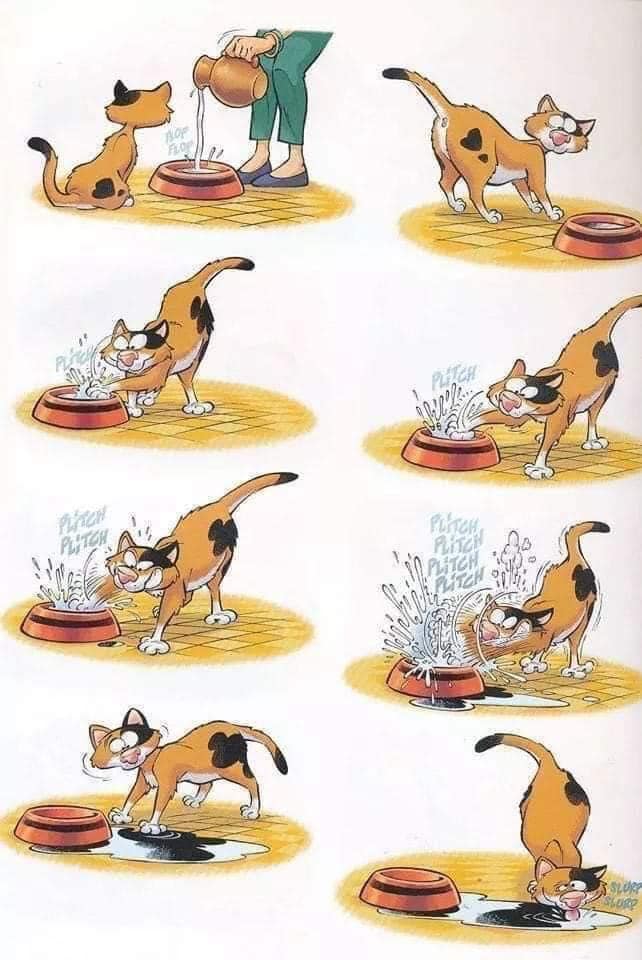 Do your cats (or cat) do what this cartoon cat is doing? Well, there are actually reasons for this type of behavior (I looked them up!).

Three of my kitties are “water kitties”: Pinga, Pandora, and Potter.

Potter and Pandora both seem to enjoy dipping their paws in the water bowl, turning them over and licking their pads, especially if I have just changed the bowls. 🙄

I don’t think they’re really thirsty when they do that. They’re just playing around.

While Pandora rather daintily just does a quick dip, dip, dip in the water, Potter is a messy boy. He will run right up to the bowl but usually isn’t able to stop in time–he’s still a baby, after all (a BIG baby…He’s growing leaps and bounds!)–so, most often, he ends up with his front paws inside the bowl, splashing water all over the place, including himself.  😀

He will also sometimes lie by the bowl and lazily immerse one of his paws into the water, keeping it there for a bit, seemingly for no reason. His fixation with getting a bit wet stopped surprising me, though, once I read that Maine Coon cats love water, and their fur is water repellent. Aha! Okay, so he’s just playing…

Pandora isn’t a Maine Coon but also plays a bit with water, a bit like the cartoon cat. When she isn’t playing, though, and actually wants a drink of water, she will delicately dip her paw into the bowl, stopping just as it touches the surface of the water. Only then will she put her head down and drink. I read that this is because the close-up vision of cats isn’t very sharp. Moving the water bowl or somehow making the water move is therefore a clever way for them to check out the level so they won’t get water up their nose or whatnot. Actually, come to think of it, Pavarotta does the same thing, sometimes. Smart cats!

As for Pinga, ahhh Pinga, she loves drinking water more than any other cat I’ve ever known/had (with the exception of Priscilla, whom we lost in January 2020). When I go into the kitchen first thing in the morning, she’s usually sitting right by the water bowl, waiting for me to change it.

And, if I let her, she will happily drink straight from the faucet. The problem with that is that she likes drinking very close to the spout, so much so that sometimes she even licks the spout, which I don’t find hygienic at all (our drinking water comes from the same kitchen faucet).

At any rate, if I turn on a faucet, any faucet, and leave the water running, she won’t stop drinking, just like a camel (did you know that a camel can drink 200 liters, or 53 gallons, of water in three minutes?  😮  ). So I have to be careful and make sure she doesn’t turn into a camel.  😉  And no, she doesn’t have any kidney issues. She just loves water, which is, yes, unusual for a cat…P.S. I haven’t found a better photo of her drinking from the faucet, sorry about that!

Speaking of faucets, there’s a reason why cats are attracted to the sound of running water. I read that it dates back to when they had to hunt for food and water, that is, way before they became beloved household pets, and it makes sense that it was easier for them to find (noisy)  running water compared to still water. Cats also knew from experience that running water probably wasn’t contaminated, the way still water can be. So it’s their “wild” DNA that kicks in where drinking water is concerned. An interesting little cat fact, don’t you think?

Okay, so running water is fresher than water that’s been sitting around in a bowl, even if you change the water often enough. Speaking of fresh, just a quick note: don’t use plastic water or food bowls (see drinking fountains, below)…

Ceramic and, in second place, stainless steel bowls are the most hygienic, thus the safest…

Moving on…A good way to provide your cats with running water is a water fountain. We have tried many different ones over the years–from the well-known Drinkwell ones to handmade ceramic ones.

Our first fountain was a plastic Drinkwell (see above photo with Peekaboo). In the beginning, it was perfect. The cats absolutely loved it. But then I read an article showing that plastic fountains can harbor potentially nasty bacteria in the crevices and scratches that form over time. Yikes!

And in fact I’d noticed that some disgusting slime (the technical term is “biofilm,” but I think slime suits it better, yuuuuuck!) had formed on the bottom of the fountain and near the filter, no matter how much I cleaned it and changed the water according to instructions.

In that same article, I read that this slime can eventually create a potentially icky health problem for cats: CHIN ACNE. Aha! Some of my cats had the beginnings of chin acne, but I hadn’t made the connection between the acne and the fountain.

The plastic Drinkwell was packed up and thrown away immediately.

No more plastic for my cats!

I eventually ordered an attractive, ceramic,  handmade fountain (see photos), accompanied by a certificate guaranteeing that the glazes used contained no harmful minerals (very important!), and that worked really well, except that it was quite heavy and had no filter, which meant that I had to change the water every day and wash it every other day, at least. That became a bit of a task, I admit. 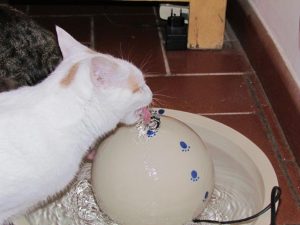 Funny thing: I can’t, for the life of me, find a photo of the kitties drinking from the stainless steel fountain! How odd. I know I took hundreds of photos when we first set it up, as I always do. Oh well, I’ll have to take some new photos as soon as we set it up again. I’ll just have to remember to have my camera nearby! 🙂